Our CFP has been open for a few weeks, and we've seen a lot of people searching for topics, sometimes asking us how to come up with one. It's hard to fire off an answer to a question like that. This is my attempt to capture some of the techniques that I use to come up with topics.

A brief note on my credentials. I've spoken at about fifty conferences. As I write this, my most popular full-length talk has been watched about half a million times. (Wat has been watched at least three million times, but it's a lightning talk so the process described here didn't apply.) I also organize a conference focused on talk quality. (You're on that conference's website right now.)

Most of my talks are centered on one or two surprising, or at least interesting, connections between ideas. For example, all of Boundaries is built up around only two of connections.

First: fully isolated testing has pitfalls when done with mocking. But small, purely functional components ("functional cores") give us much of the testability without those pitfalls.

That's a highly condensed description. Fully elaborating here would turn into Boundaries itself; it's better to just watch the talk if you're interested. In case it helps, here's how I'd say the same thing using terminology more native to the topic:

Everything in Boundaries came from those two connections. Neither of them is surprising to someone familiar with the ideas, but I'd never seen anyone put them together and tell the whole story. I turned these two ideas into a few Keynote slides with just a few words each, then went to work expanding them into a talk.

(Talk preparation itself is a separate process that I'd like to write about some other time. It's significantly more complex than what we'll cover here.)

The problem is that insights like this can come at any time. Every time we solve a programming problem, the solution may be worthy of a talk. But we rarely record those insights for later user. So how do we record them, so they're available for review when there's a CFP to submit to?

I keep a long-lived Keynote file called _ideas.key to track talk ideas. It's an unorganized jumble of brief, cryptic notes to myself. (Because you're probably wondering: the underscore is there to make it sort first in the file list.)

People often want to submit a talk to a conference, but they don't know what to talk about. _ideas.key is my input: if I want to do a talk, but I'm not sure what it should be about, I can scroll through years of little notes to see what's interested me over time. A slide in _ideas.key could be anything – a snippet of code, a screenshot, a list of seemingly-related ideas, a joke; but all of them seemed interesting at some point.

The screenshot below is the first time that anyone has ever seen any part of this file. It shows one of the 50 slides currently in my _ideas.key. The slide's only job is to remind me of a thought that I already had, so it's very terse. Do you see the connection, or is it too cryptic? (I genuinely don't know; I'm too close to it!) 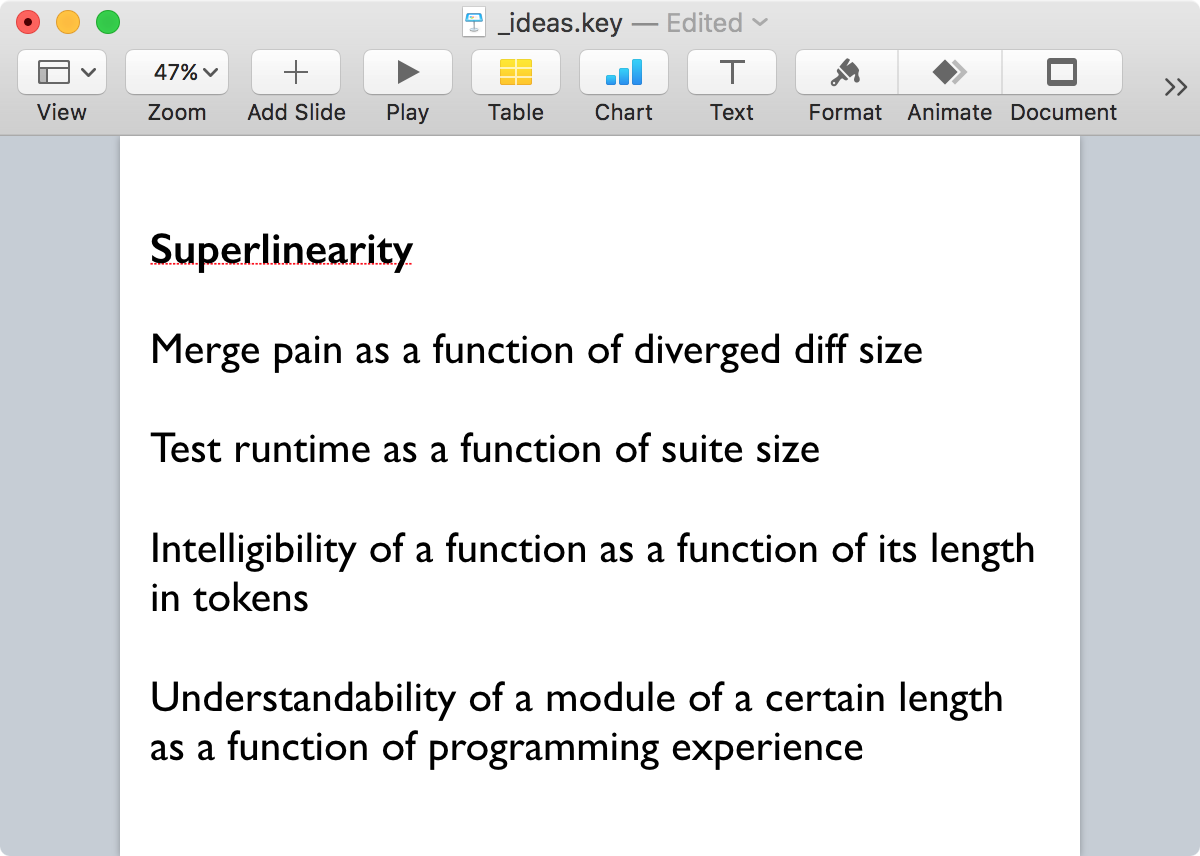 This slide relates a series of "left hand side" values to "right hand side" values. It suggests that in each case, the left hand side increases faster than linear as the right hand side increases. For example: if a diff is of length D, and our ability to understand it is U, then maybe U=kD2 for some constant k, or maybe even U=k2D, but definitely not U=kD. In more casual language: the longer a diff gets, the more confusion is added by each new line of it.

This is a wild guess. It's couched in excessively quantitative language; I'd never stand on stage and say "understandability goes like kD2." I did no research about this at all before writing it some time in 2015, and even as I write this I've spent no more than one minute thinking about it, ever. But it expresses the idea in a brief form that I trust future me to understand.

(Please don't steal this and do a talk called "Superlinear"!)

There's a problem with all of this. Deconstruct's CFP closes soon, so you don't have a year to accumulate an _ideas.key. But there's no rule that says you have to accumulate it passively.

Your homework is to create an empty _ideas.key right now. Then go through each of the categories below and make note slides about examples you can remember. One slide per idea or event. Use a big font. No formatting; just black text on white. Only add enough detail to remind you of the idea; don't write paragraphs. Here are the categories:

You may not have entries for all, or even most, of these categories; we don't all notice the same things. For the same reason, I'm probably missing entire huge categories that I'm blind to. But I bet that at least a couple of these will spark some notes for you.

Make that list of notes, not worrying about whether they're "good ideas" or would make "good talks"; no one will see this list. (Unless you write a post like this one in five years, but even then you can choose a less-embarrassing example like I did!) When you scroll through your _ideas.key, I bet you'll find something that can be a talk.

It's hard to know which ideas will become useful later. Sometimes, an idea is so compelling that I draft a talk on the spot. Other times, I build a talk by going through _ideas.key and looking for a couple ideas that seem related. As examples, here are the core ideas that I used in some of my favorite talks:

If you've never given a talk and are thinking about starting, now is your chance. Deconstruct's call for proposals is open through January 31st, 2018, at 11:59 PM Pacific time. We're an unusual conference: most of our speakers are invited, so we introduce balance with a CFP that's open to first-timers only. We cover all travel expenses, we provide mentoring to prepare you for your first talk, and we pay you the kind of speaker fee normally reserved for keynote speakers (and even then, only sometimes).

Make yourself an _ideas.key (or _ideas.ppt; we don't judge). Find the most interesting note, or maybe two that are connected in some way. Spend 30 minutes to talk through a summary of the idea, two minutes each time, for ten repetitions, until you have the core boiled down into a clear statement. Then send us a video! Once your talk is accepted, it's time to prepare the talk itself.